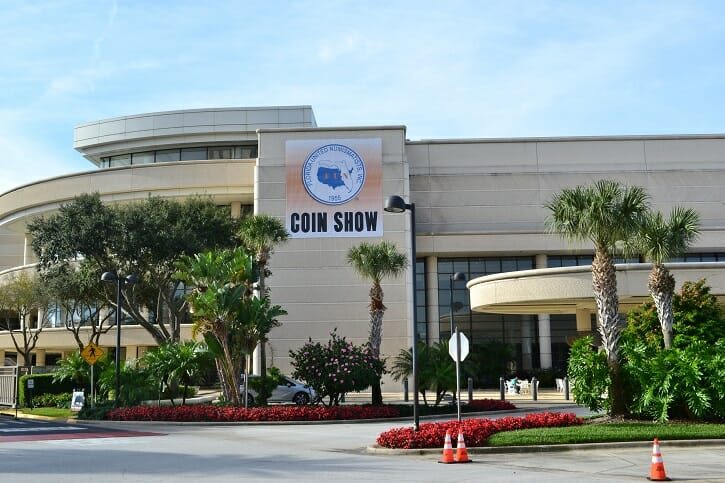 Greetings. I would like to file the following report from the FUN Show that I attended last week. The 65th Annual Florida United Numismatists Show (FUN) took place in Orlando from January 9 – 12 at the Orange County Convention Center. The show is renowned for being the bellwether event on the numismatic calendar. The FUN Show always kicks off the numismatic year on a high note. This year was no different. As usual, the 1715 Fleet Society had a table that offered a variety of educational materials for public consumption. Also, we had a golden opportunity to advertise and discuss our upcoming conference in Havana scheduled for late March.

I arrived in Orlando on Tuesday the 7th and promptly registered at the FUN Show Registration Center. There I was greeted by the hard working and dedicated staff of the Florida United Numismatists. I deposited all of my display material in the secured “Safe Room” and left for the day. I spent the rest of the afternoon and evening resting and preparing for what I knew would be several days of hard work.

Wednesday the 8th was the day designated as dealer and exhibitor “set up” day. The doors opened promptly at 2:00pm and I proceeded to get my display table in order. Since we were not yet opened to the public I did not get a lot of foot traffic at the table. But, this afforded me to spend some time walking the bourse floor and seeing old friends. I was able to see several early Fleet Society members including Dan Sedwick and Augi Garcia (Winter Park, Florida member numbers 2 and 3 ), Steve and Linda Hodges (Vero Beach, Florida member  numbers 4 and 5) and Danny Lee (Lakeland, Florida member number 37).

On Thursday evening I attended the Sunken Treasure Book Club Dinner at Delmonico’s in Orlando. About 13 people were present and all had an enjoyable dinner and pleasant evening.

Friday the 10th, the second day  of the show, featured the Sunken Treasure Book Club meeting at 1:00pm. About a dozen dedicated treasure book bibliophiles attended. Fleet Society member Terry Armstrong (Merritt Island, Florida member number 9) made an appearance with several new books that he has just written (more about that in a later post). As usual, the meeting was presided over by Dave Crooks. Also visiting us at our table on Friday was Jorge Procter (Oakland Park, Florida member number 10), Bernie Reller (Gainesville, Florida member number 16) and Jose O. Busto (San Juan, Puerto Rico member number 18). I also had the pleasure of meeting Ricardo Lopez, President of the Cuban Numismatic Association, Inc. from St. Petersburg, Florida as well as his father. We had a long discussion about the upcoming 3rd International Conference on the 1715 Fleet which is to be held in Havana, Cuba in March. He promised to promote the conference to members of the Cuban Numismatic Association.

Saturday the 11th was highlighted by a visit from Captain Jonah Martinez (Port St. Lucie, Florida member number 66) who took time from his busy schedule to set up a display of his personal collection of 1715 Fleet coins and artifacts. These items, all recovered by him, were nicely arranged in a display case and drew quite a crowd. Accompanying him was his daughter who enjoyed shopping on the bourse floor while Jonah remained all day at the table to answer questions and discuss his finds. We are grateful for Jonah’s willingness to share his collection with us.

Sunday morning I packed up and got ready for a trip to Havana, Cuba to complete arrangements for the March Conference. My time in Cuba will be the subject matter of a later post.