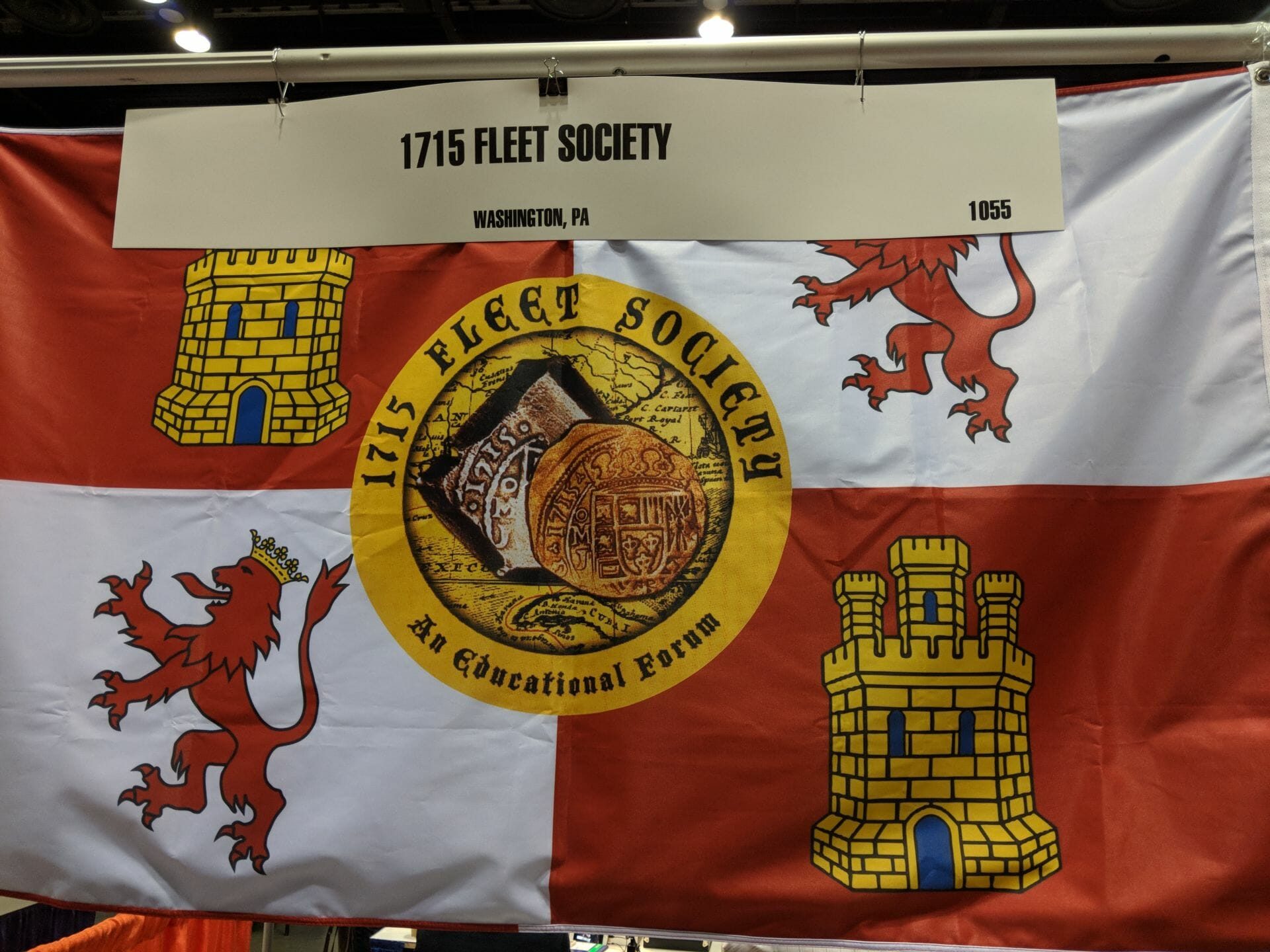 Greetings. I just finished spending several days at the Florida United Numismatists coin show in Orlando Florida. I left for the show on Sunday, January 6 and spent a day in St. Augustine, which is one of my favorite cities. I took a few pictures of the Christmas lights in St. Augustine which is always an impressive sight.

As usual, the Fleet Society sponsored a table complete with educational materials and information on the Fleet Society. In addition, we displayed a wonderful array of 1715 Fleet artifacts from the personal collection of Fleet Society member Jonah Martinez. Jonah was intimately involved in the recovery of the famous 300 Anniversary Hoard, which consisted of over 300 gold coins found on July 30-31, 2015.

Jonah personally set up the exhibit and was available to talk about the items that he found, which included many gold and silver coins as well as other interesting relics that he had on display. This was a great educational opportunity for all of those who visited our table. The Fleet Society would like to personally thank Jonah for all of the time and effort that he devoted to help the Society fulfill its educational mission.

I arrived in Orlando on the afternoon of January 7. I quickly checked in at the convention center and had a chance to talk to some of the board members of the Florida United Numismatists who were responsible for organizing the convention.

Wednesday, January 8 was set up day. Jonah arrived at about 4 o’clock and began to get the table ready for exhibiting his collection of artifacts and coins. Also accompanying Jonah was his chocolate lab named Ike, who spent most of his time sleeping under a table in our booth.

We were later joined by John Pullen (Santa Fe, New Mexico), another Fleet Society member, who spent time with us over the next few days. By 6 o’clock the display was completed and we headed off to the Capital Grille, where we were joined by John Pullin and Scott Leckie (Washington, Pennsylvania), Hawk Levy (who runs a jewelry store in Port St. Lucie, Florida) and several of Hawk’s staff, Jocelyn, Sam and John.

The Sunken Treasure Book Club held its annual meeting on Friday afternoon, January 11th, at 1PM. Those in attendance had an opportunity to talk about their collections or interesting experiences that may have happened to them in the preceding year. I gave a brief presentation regarding the activities of the Fleet Society. I pointed out that the Society has a new and updated website which went live on January 1, 2019. I discussed some of our recent research and our upcoming conference, which we are planning to have in Havana, Cuba in 2020. Additionally, there was some discussion about having the Society take over the publication of the Plus Ultra Newsletter, which went out of print a few years ago. This newsletter was the brainchild of Fleet Society director Ernie Richards who started the newsletter in the early 80s. This publication was the heart and soul of the shipwreck community and it was with great sorrow that Ernie had to discontinue its production. ln the future, if enough volunteers can be gathered who would be willing to contribute articles, it is possible we could relaunch the Plus Ultra.  It also was agreed that next year the Fleet Society will hold a membership meeting following the meeting of the Sunken Treasure Book Club.

For me, the show wrapped up on Saturday afternoon when I left for Bradenton Florida.