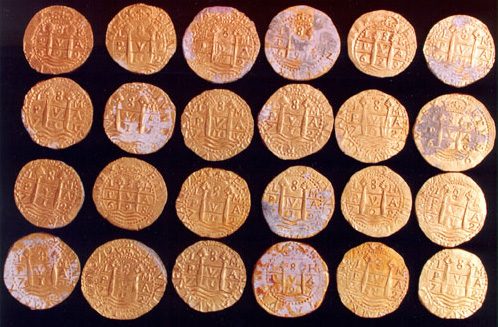 Fleet Day this year, July 31st, will mark the 297th anniversary of the tragic loss of the 1715 Plate Fleet along Florida’s east coast. Exactly twenty years ago, July 31st, 1992, Captain Stephen Shouppé was celebrating Fleet Day by diving on a still unidentified Fleet site known as the Cannon Pile Wreck. Capt. Shouppé had a good day. I won’t spoil the story for you since we have, courtesy of Ernie Richards, the publisher of the PLUS ULTRA Newsletter, a contemporary account of what happened that day. The article below originally appeared in the PLUS ULTRA Newsletter in 1993 and is reprinted here with Ernie’s permission.

GENERAL UBILLA’S COIN COLLECTION? Fresh off the ocean floor, these are 24 of the 39 gold pieces recovered by Steve Shouppé and the crew of the Tequesta. All are Lima 8-escudos, and their dates range from 1697 to 1712.

*Coins so marked are the two “near-royals.”

Published in the PLUS ULTRA Newsletter, First Quarter 1993 issue

The greatest news to come from Florida’s treasure Coast for the 1992 diving season compares to a scene from your favorite adventure movie. King Solomon’s Mines. Raiders of the Lost Ark. You name it! The one-day find off the coast near Sebastian Inlet was a cool $1 million in ancient gold and silver coins. Captain Stephen Shouppé, of Palm Bay, and the crew of his salvage boat Tequesta were the players in this scene, and recovering a portion of the 1715 Spanish Treasure fleet’s booty was the script.

Stephen Shouppé (shoo-PAY) is the consummate treasure hunter. He looks the part, he acts the part, he does his homework, and … he finds treasure! Big time! With his head shaved and wearing his “tropical whites”, which includes an air-conditioned white Panama hat, he could step into the image of Frank Buck or Trader Horn, or any of the real-life or fictional adventurers of yore. His tall, strong build just adds to the treasure hunter persona which he wears so well.

A relative newcomer to the professional treasure-hunting fraternity here in Florida, Stephen has put in a hard five years, and he has “paid his dues.” He studied the recent past history of the 1715 recoveries, and he picked out a piece of the ocean where the odds looked good for finding what others may have missed. His first season out he did just that and found seven clustered cannons, apparently representing a new wreck or an unworked section of an adjacent, known wreck. Artifacts and occasional coins were his temporary rewards for the next few seasons as he methodically searched the sea bed for King Philip’s strongboxes. Under his salvage lease he could follow the “trail” of his wreck, even into an adjacent claim area. And this is how he came to be where he was diving on July 31st, 1992, anniversary of the disastrous hurricane of 1715.

The first indication that this day was going to be like no other aboard the Tequesta was when Shouppé surfaced with a pouch full of gold doubloons. He had been scouring the bottom fifteen feet below, when his metal detector whined at him. It was a rocky, sandy spot located between two coral boulders, and Stephen began hand-fanning a hole in the ocean floor in order to find the “hit.” After digging an eighteen-inch hole, he grabbed the debris in the bottom of the cloudy pit and moved over to clear water. When he carefully opened his hand, the sand quickly filtered out, and the large, bright flash of gold he saw got his adrenalin pumping. The wreck site had given up one of the greatest treasures possible, a Lima eight-escudo piece, dated 1712 and so perfectly struck that it is called a “near-royal.” The search was on in earnest!

Before the day was over, the pocket of treasure yielded 385 silver coins —four-reales and eight-reales— a silver wedge, silver buckles, a large gold-silver-ebony wood artifact yet to be identified, and 38 more gold coins! Many of the gold pieces were Lima eight-escudos, another of them so excellently struck as to also be considered a near-royal. Among the 39 gold were several doubloons from the Mexican mint, and all dated coins were minted between 1697 and 1714. The only undated gold coins were four Mexican 8-escudos, the “GRAT” series of 1714 which are even more rare than some of the dated coins.

The silver wedge bore no tax stamp and had been disguised, strong evidence that the ingot was being smuggled past the king’s overseers. Contraband! This, and the collector-type series of dated coins, indicate to Shouppé that he might have discovered another, smaller craft which was in company with the larger ships and was designated to sneak into another port when the Silver Fleet entered the river at Cádiz. Perhaps, theorizes Shouppé, this vessel was a personal patache belonging to the General of the Fleet, Juan Esteban de Ubilla, who perished in the disaster. But this is a mystery which will take some time to unfold.