A 1715 Lima Eight Escudos from the Fleet? 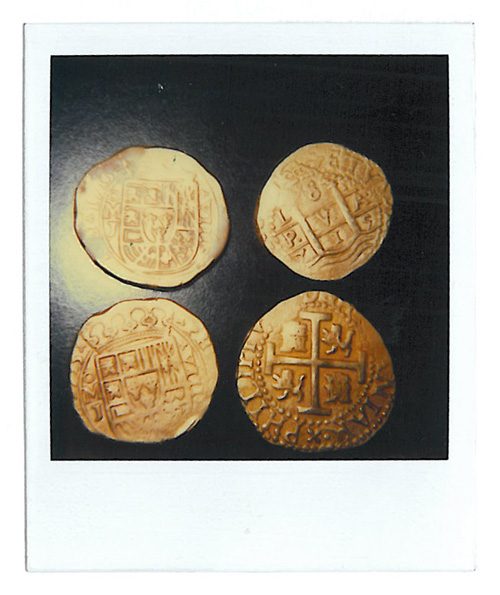 The Holy Grail of Fleet Collectors

They say a picture is worth a thousand words. They also say pictures do not lie. But try telling that to anyone who has ever snapped a photo of a UFO – or Bigfoot. Oftentimes a picture ignites a mystery and starts a controversy, leaving more questions unanswered than resolved.

And so it was with Frank Noga – “Mr. 1715” – of Eastlake, OH. Little did he know what he was about to discover when planning his yearly pilgrimage to the FUN Show in Orlando, FL. He was about to uncover a mystery – not on the beaches of Florida, but in the archives of an old friend.

The story begins with Dan ThompsonDan Thompson (1920 – 2005) Was a diver and original member of the Real Eight Company. Born in  Savannah, Georgia, he  was an electrical engineer and had a distinguished career in the U.S. Air Forc..., an original Real Eight Co. member who died in 2005. Frank had been a frequent visitor to Dan’s house in Satellite Beach. As he was planning his trip in 2008, Frank had spoken to Dan’s widow, Jane, and made arrangements to visit her. Frank tells it this way:

As it happened, I went directly to Jane’s house right after my arrival. As promised, Jane allowed me to look through the past. Dan was a stickler for keeping well-documented scrap books and photo albums. After looking through the material presented, Jane let me take a large group of Real Eight memorabilia for further study. Once I got the material home, I was moved by what I was finding – documents, letters, pictures – the whole works. All the material was about the early days of the Real Eight CompanyAlso referred to occasionally as “The Real 8 Company”- was incorporated in 1961. It had eight members….Kip Wagner, Kip Kelso, Dan Thompson, Harry Cannon, Lou Ullian, Del Long, Erv Taylor and Lis.... Then, while I was going through some old photos, out drops this Polaroid of four gold coins. Two Mexico eight escudos dated 1715, a Lima eight escudo (cross side up) and a fully dated 1715 Lima eight escudo! It has always been said that a 1715 Lima could not be on the 1715 Fleet – but here is photographic proof in the archives of an original Real Eight member that undeniably shows the unlikely piece keeping company with two fully dated 1715 Fleet Mexico Eight’s! How could this be?

Skeptics, of course, will say that the photo is just someone’s effort to create a set of dated 1715 eight escudos, whether Fleet or not. This, of course, is possible. But how did it find its way into Dan Thompson’s records? And for what purpose? Was Dan trying to buy a 1715 Lima eight? But why? With all the gold pieces found by Real Eight, why would he want to buy one?

The polaroid that Frank found was sent to several experts for comment. Phil Flemming of Scottsdale, AZ, had this to say:

The Lima mint had a good gold production in 1715, to be precise, 1,044,049 pesos. For the Fleet era (1696 – 1715) this is the third highest after 1705 and 1707. Gold production, especially in busy years, was usually well underway in January. There is every reason to believe bright, new 1715 onzas were leaving the Lima mint in the first month or so of 1715. Echeverz’s Tierra Firma Fleet, loaded with Lima and Bogota gold cobs, had long since left Cartagena, arriving in Havana in October of 1714. No 1715 Limas rode on Echeverz’s ships. But was there another way a 1715 Lima onza could have reached Havana by July 27th (when the 1715 Fleet sailed)? Certainly! In fact, there was plenty of time for a traveler leaving Lima in early 1715 to have caught up with the 1715 Fleet in late July. Merchant naos and fast avisos regularly plied the coastal Pacific and Caribbean waters. Six weeks from Peru to Panama and 8 weeks from Panama to Cuba were slow trips for avisos. Panama to Vera Cruz was an even shorter voyage. A traveler from Lima getting to Vera Cruz by early May of 1715 could have caught a ride with Ubilla’s Flota to Havana. Without question, then, someone leaving Lima in early 1715 could have caught the Fleet in Havana, but did anyone actually do so? The answer to that question lies in the manifests of the 1715 Fleet.

Daniel Frank Sedwick, author and specialist in the colonial coinage of Spanish America, was a bit more skeptical. Dan believed that it was very unlikely that the coin in the picture was on one of the ships of the 1715 Fleet when it went down:

Most likely the coin is from another source (possibly a 1719 wreck off the south of England) and was put together with the other coins as a representative piece. The fact is that only a small handful of 1714-dated Lima 8 escudos were found on the Fleet, which means that the later date is even less likely to be among the finds. There is a chance that the 1714’s and 1715’s were simply “on top” and almost exclusively recovered by the Spaniards in the 1700s, or perhaps they are still buried out there somewhere. But I am still somewhat skeptical that 1715’s could have made it to the Fleet in the first place.
The late Lou UllianLouis J. (Lou) Ullian (1932 – 2010) Was a diver and original member of the Real Eight Company. A native of Worcester, Massachusetts he served in the U.S. Navy, Naval Weapons Station from 1956 – 19..., an original Real 8 member, felt that it was unlikely that this piece was from the Fleet, but did not rule it out either. He believed that a traveler from Lima, even stopping in Cartagena, had time to catch the Fleet in July. Lou had never seen the coin in the photo.

One thing all the experts noticed was that the 1715 onza in the photo appears to be sea salvaged. Hopefully, the onza in Dan Thompson’s photo will resurface and be examined to confirm or refute a Fleet provenience. If any of our readers know of its whereabouts, please be in touch.

This picture of a 1715 Lima eight escudo was provided by Daniel Frank Sedwick. While this specimen is not from the 1715 Fleet it is a nice example of this rare date (from Sedwick Treasure and World Auction #12, October 25-26 2012, lot 36).