August 2020 Treasure of the Month 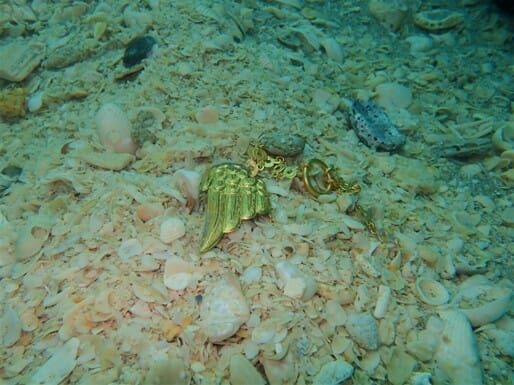 Our Treasure of the Month for August has its origins in a prior treasure that we featured a few years ago in December, 2015. Here is the story.

On Sunday, August 15, 2010 diver Bonnie Schubert found an impressive artifact at the Douglass Beach WreckA 1715 Fleet wreck site located a few miles south of the Fort Pierce Inlet. It is often referred to by its old name, “Colored Beach.” In some early Real Eight Company correspondence, it was referr... More site south of Fort Pierce, Florida. The artifact, a gold bird, was at first thought to be an eagle but was later identified as a pelican.  The stately bird, however, was not complete. It was missing its right wing.

Much like the Ark of the Covenant, the elusive missing wing was sought after by any number of divers for years. Many had given up and concluded that it would never be found. But one man and his crew did not give up.

It was Sunday June 28, 2020, Douglass Beach.  Operating from the recovery vessel “Perfect Day”, Captain Henry Jones and Captain Phil Ratcliff along with crew members Oliver Ackland-Snow, Tracy Newman, Brian Fisher, and Melissa Grunell were preparing for another day’s search. It was like any other typical day on a 1715 Fleet wreck site. They were hopeful of a valuable find but recognized that success in this business is often ephemeral. They were totally unaware that they were about to witness something that was so improbable that the odds of what was about to happen would have been incalculable.

Using their prop run blowers, the crew opened up a hole in the sand on the ocean floor to better enable them to search the area for Fleet artifacts. As fate would have it, it was the 20th hole of 2020! Henry Jones, along with crew member Tracy Newman, were exploring the outer limits of their search area when something caught his eye. In his own words……

“I knew exactly what it was and I was pleasantly surprised by the gold chain that had come out of the soft coquina where it was found. The chain at one time connected the two wings and bird together. It was an unbelievable feeling to find it and it took my breath away for a second. I then soon realized that I was the first person to touch it since it was lost at sea 305 years earlier. It was awesome. Tracy and I stayed on the bottom for a while to enjoy the moment and take some pictures.  I rechecked the area one more time before heading to the surface. Brian Fisher was waiting top side on the boat and when I pulled the wing out of my glove he could not believe his eyes. It was, like our boat, a “Perfect Day.”

And so, the bird, or “Pelican in Piety” as it is known, is now complete. And the crew of the “Perfect Day” is also complete as they were the rare group who searched for the elusive and manage to find it.”

Special thanks to Henry Jones and Tracy Newman for providing text and images. Also, special thanks to John Brandon, Operations Manager for 1715 Fleet-Queens Jewels, LLC who approved this article for publication.

*** UPDATE: TCPalm published an article about this piece after the Fleet Society posted this Treasure of the Month story. That article can be found here: https://www.tcpalm.com/story/news/local/2020/08/07/missing-piece-statue-305-year-old-spanish-shipwreck-recovered/5516992002/.