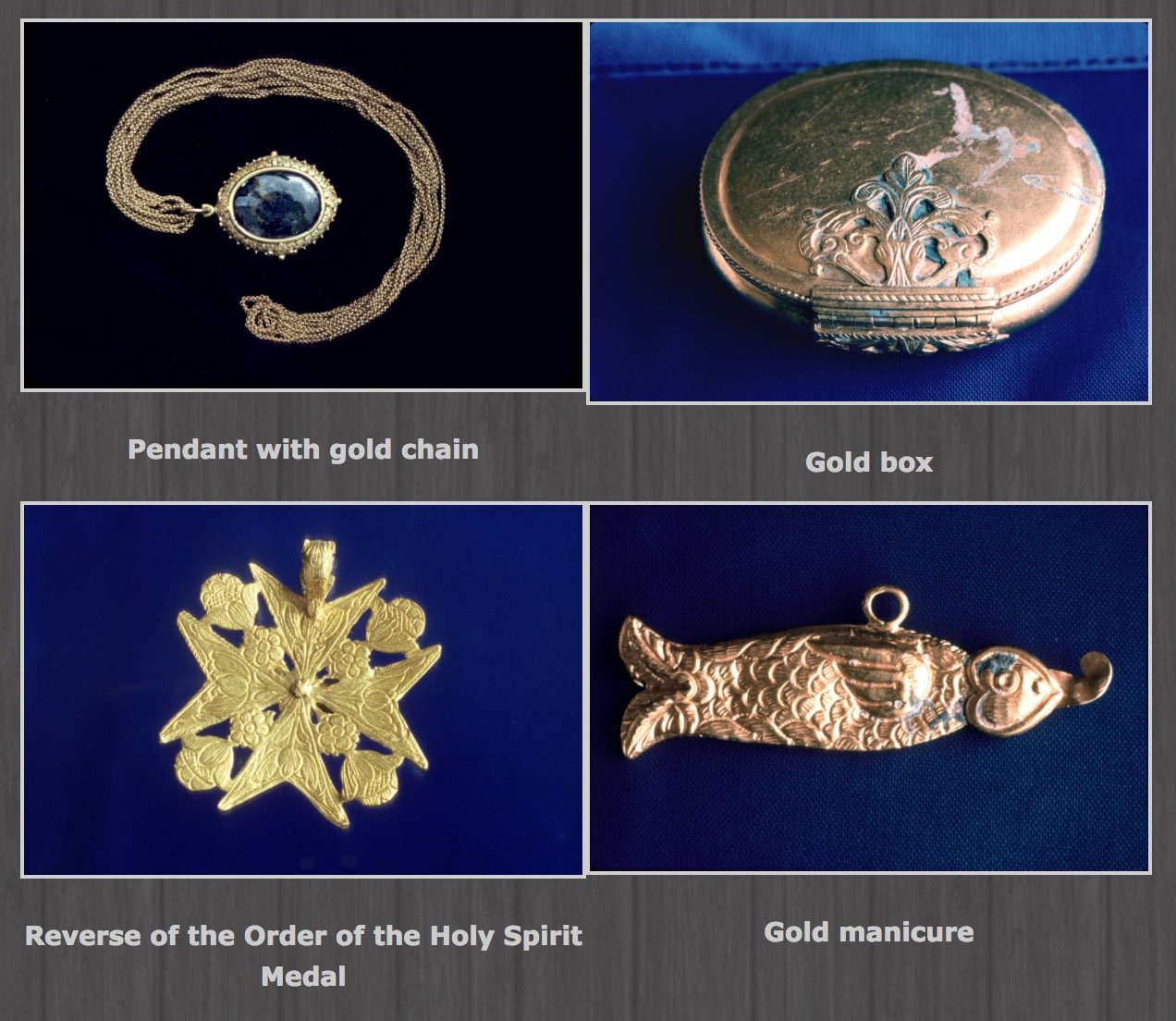 In June of this year, we announced that the Fleet Society acquired a large group of 1715 Fleet-related documents including records, photographs, charts, graphs, articles and research materials long thought to be destroyed.

In subsequent posts, we advised that our efforts to organize and inventory this recent recovery would be time-consuming and an ongoing process. We promised to keep everyone updated as this work progressed.

Through our review of this material, we came across the following images which were in a binder of slides that were once used in presentations from a now obsolete slide carousel (at least we surmise.)

There were 62 images which we have broken down into 3 parts. The first part contains pictures of artifacts that our research leads us to believe were from the Cabin Wreck site near Sebastian, Florida and the Douglass Beach site which is south of Ft. Pierce, Florida. The second part is gold coins recovered from the Douglass Beach wreckA 1715 Fleet wreck site located a few miles south of the Fort Pierce Inlet. It is often referred to by its old name, “Colored Beach.” In some early Real Eight Company correspondence, it was referr... site. The final part is images of the recovery vessel Virgalona. Images of the coins and the Virgalona will be posted here in subsequent articles.

The images below (Part I – Artifacts) are further divided into two subgroups; rosaries and non-devotional artifacts.

Note that some of the pictures depicted below were already incorporated into this website before the Fleet Society acquired them this summer. Others are new and likely have never been seen (especially the component parts of the rosaries).

The rosaries are displayed below first in group shots and then in their component parts.

We hope you will enjoy seeing these images.

Gold religious artifacts including crucifixes and medals displayed on a sixteenth-century Bible. 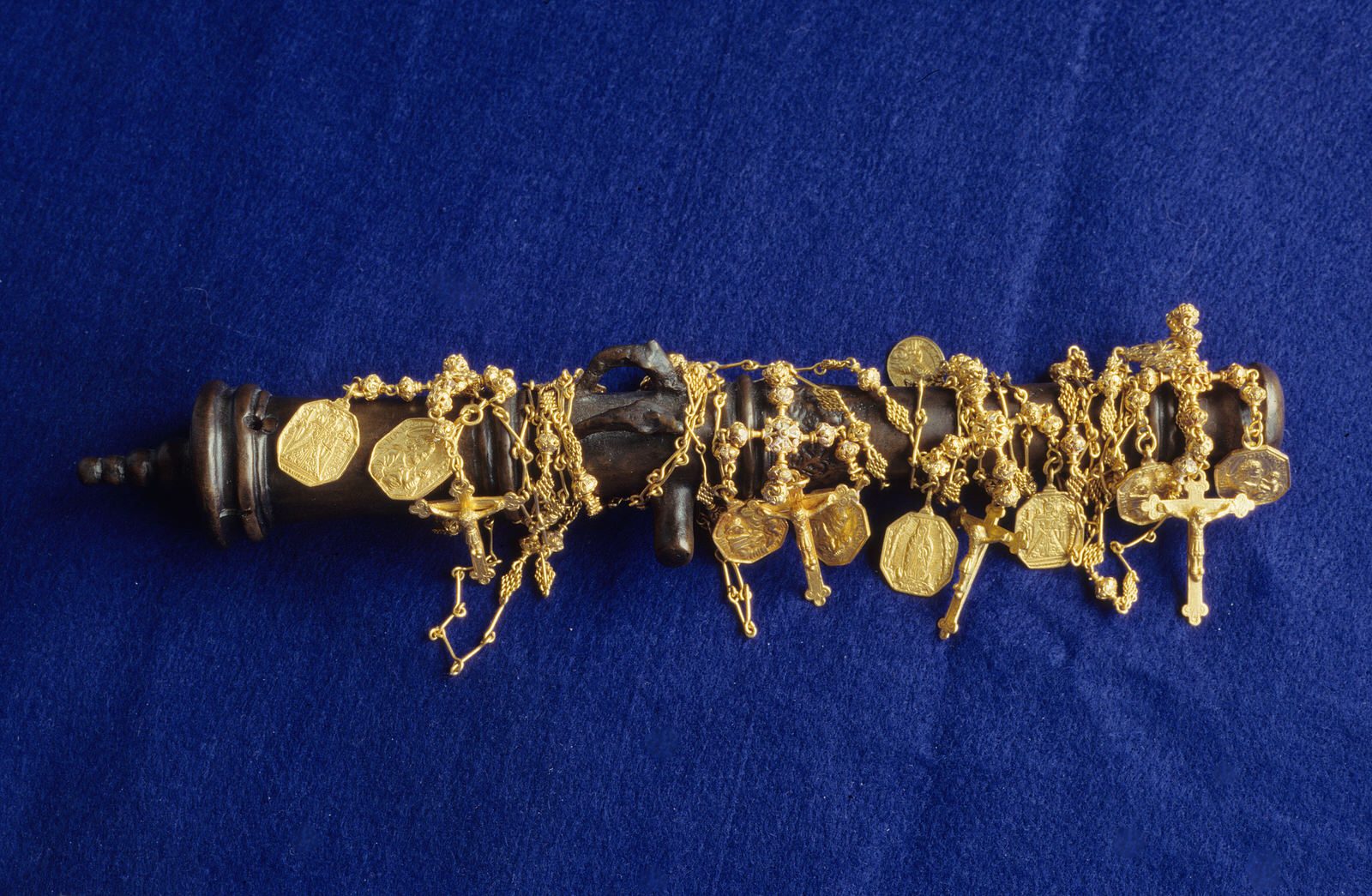 The component parts of a typical rosary consist of the loop, the center, the pendant, the crucifix, the chain, and the beads. The loop is the largest and most important part of the rosary inasmuch as it contains most of the prayer beads.

The center is a medal or medallion, usually depicting the Virgin Mary or some other saint. It joins the two ends of the loop.

The pendant hangs down from the center and is strung with beads and sometimes medals. A crucifix (cross with the image of Christ) or a plain cross hangs from the bottom of it. 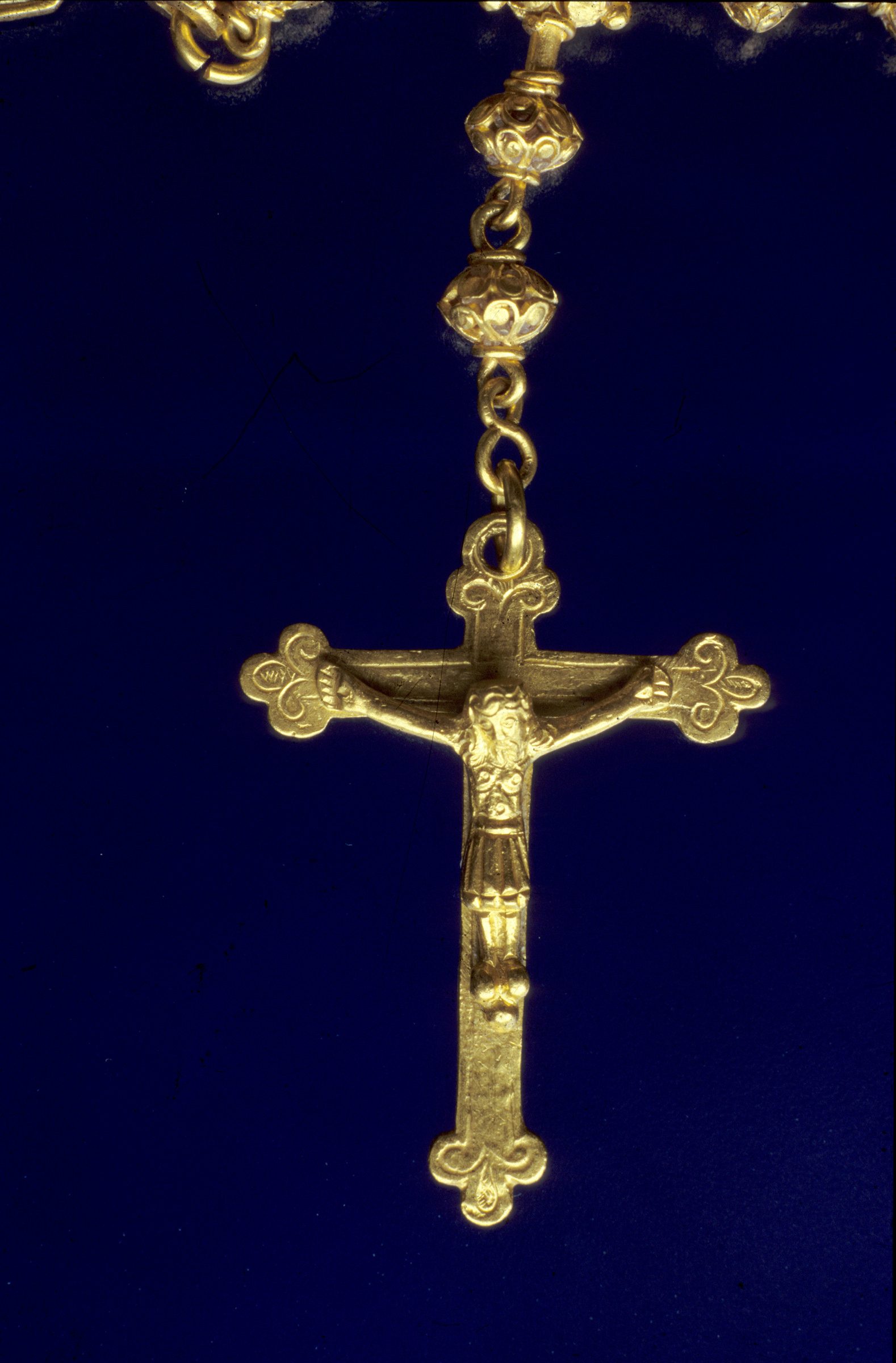 The chain consists of beads, medallions, and other parts of the rosary.

The beads are contained in the loop. Usually, there are 59 beads, 10 in each decade (usually 5 decades) together with “Our Father” beads, and “Hail Mary” beads on the pendant.

The images of non-devotional are shown above. A gold pendant and chain and box were probably the property of a wealthy merchant. The Maltese Cross (known as the Order of the Holy Spirit) was featured in our December 2011 Treasure of the Month and our June 2012 Treasure of the Month.

The Maltese Cross has 8 rounded points which represent the 8 beatitudes. The cross itself is formed by a four-petaled Lilly of France as a symbol of the four Gospels. Four fleurs-de-lis, each with three petals; the total of 12 petals signify the 12 Apostles.

The gold manicure set, depicted here as a gold fish, was previously featured on this site in the October 2012 Treasure of the Month.

Stay tuned for future posts regarding other interesting images, including coins and pictures of the recovery vessel Virgalona.