September 2021 Treasure of the Month 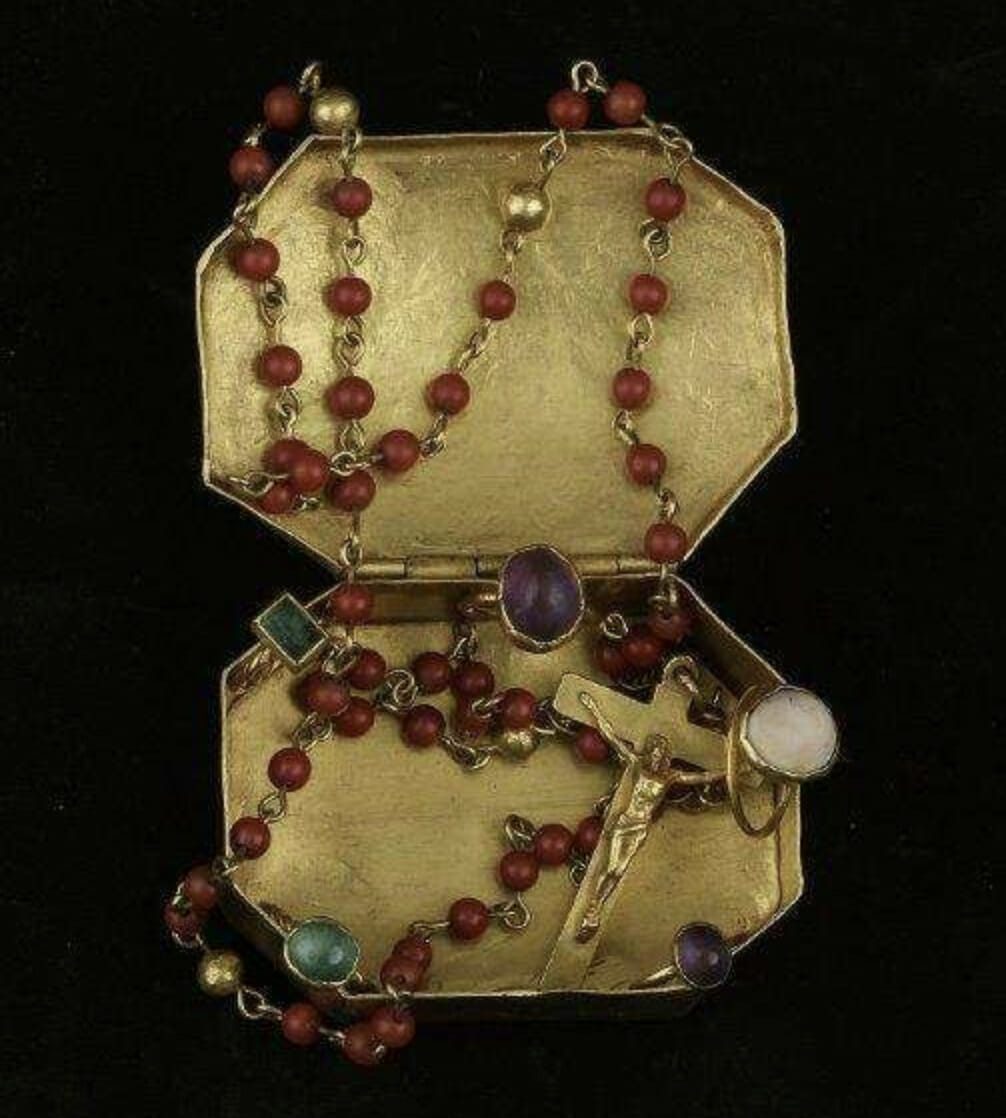 Our Treasure of the Month for September is this beautiful gold box with a coral rosary and rings set with various gemstones. The recovery of this  fantastic treasure has a very interesting back story.

On August 1, 1995 Mike Maguire was a part time carpet installer part time salvor working the wreck sites of the 1715 Fleet. As such, he was quite aware of the fact that coins were often found on beaches opposite the wreck sites after storms had passed through. On this particular day a Category 1 Hurricane (Erin) was scheduled to make landfall near Vero Beach. Mike had an idea. Rather than searching the beach AFTER the storm hit he wanted to be there AS the storm hit. In this way, he felt, he would gain an advantage over others who would undoubtedly be searching the beaches after the storm passed through.

He reached  out to everybody he knew to see if anyone wanted to go along.  There were no takers. So, he packed up his metal detector and headed out in the middle of the hurricane. He decided to head to Sebastian, a good location for beach finds. He arrived  at the Seagrape Trail Beach Access parking area just before daybreak.

At that point, winds were gusting at 50 – 75 miles per hour.  When he arrived he was surprised to see two other individuals who apparently had the same idea. They exchanged pleasantries, wished each other luck and headed out.  He figured that the two men would split up, one going north and one south. This would have left him searching after one of the men passed over the area. But, they both headed north so he went south.

Mike’s research of Fleet history lead him to believe that searching near the dune line, where the high tide surge would have cut the beach back, would be productive. In this case, his research paid off.

As he headed south he had to dodge debris such as  pilings, boards, trees and the like which were still being carried in by the tide. About 200 feet south of the remnants of the beach crossover staircase he spotted gold at the base of the cut right below the dune line. He ran his detector over the gold. There was almost five pounds of gold jewelry and other items in an area of less than three feet. His theory that these items had fallen out of the dune as a result of the high tide surge proved correct. He surmised that the treasure had been buried by the owners to protect it from other survivors and the real threat of pirates. Apparently, the cache had never been retrieved and laid undisturbed for nearly 300 years.

There were actually two gold boxes with contents found by Mike Maguire on that day. One was our featured treasure, shaped like an octagon, and the other was oval.

In the gold octagon box were a number of rings along with a red coral and gold rosary. The rings were of a small size suggesting that they belonged to a woman. The gold oval box contained a number of rings of a larger size, a red coral rosary and bishop style cross which weighed six ounces.  The cross contained six cabochon cut emeralds suggesting that these items belonged to a man.

Our thanks to Captain Mike Maguire for providing the information that was used to prepare the text for our Treasure of the Month. The text was summarized from a letter that was prepared by Mike which he kindly submitted to us for our use.