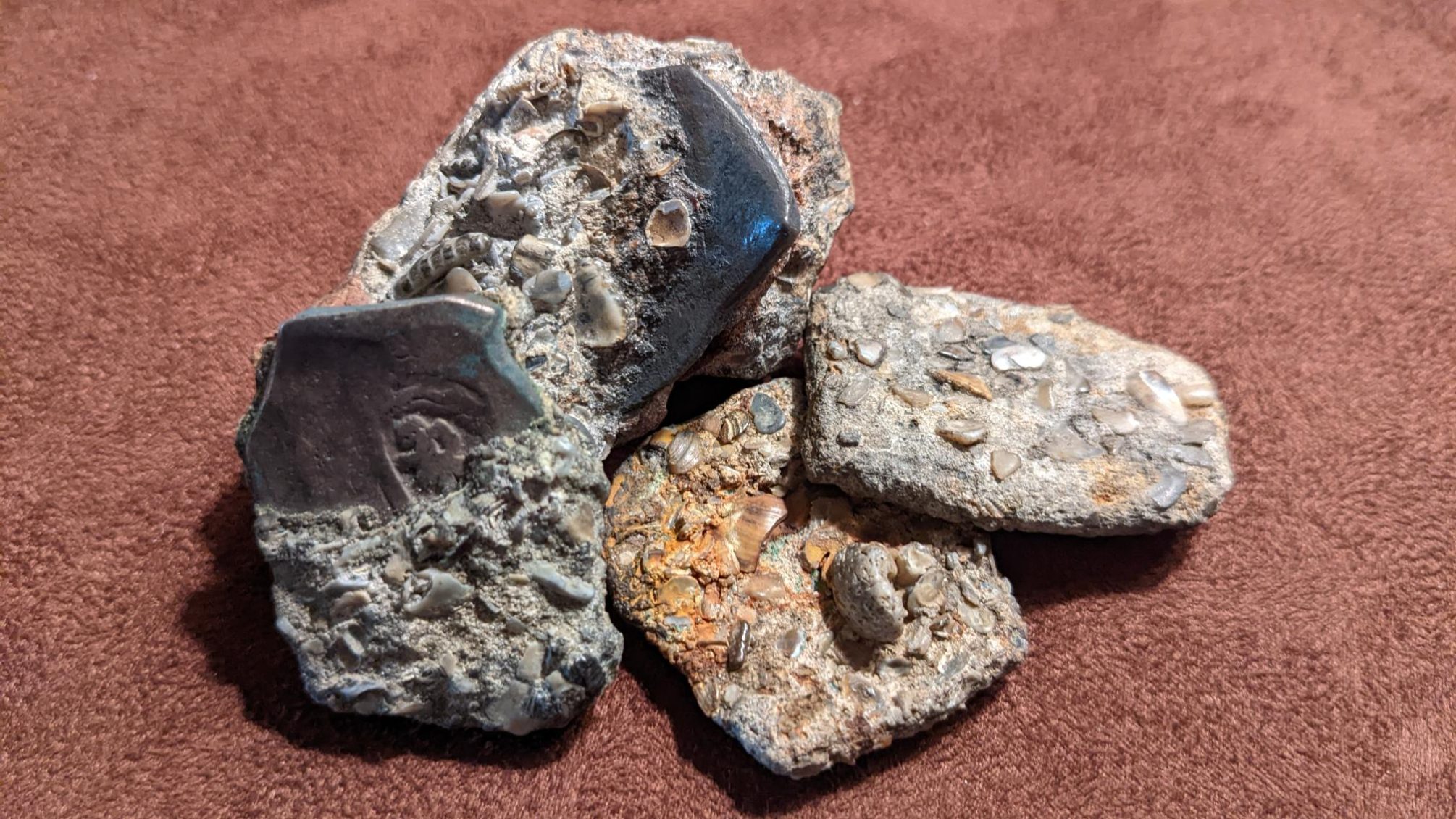 We welcome in the new year with our latest Treasure of the Month for January, this small group of encrusted silver eight reales. Featuring encrusted objects is a hallmark of our monthly treasures. It is no secret that we have a fascination with these objects, likely because they offer a certain aura of mystery to coins and artifacts that are encased within them. When handling an encrusted object it is not hard to imagine what great prize might be hidden by the encrustation. If only we could remove the sand and shells we could discover what secret lies within. But, actually, removing the encrustation may not be the best thing to do. Encrusted objects are extremely popular among collectors and removing the hardened surface material may either diminish the value of the item or, in some instances, destroy it.

Upon closer observation of our Treasure of the Month it can be seen that two of the encrusted coins are partially visible.

Peeking out from underneath years of ocean deposits are two Mexico eight reales.  Although there is not enough of each coin to ascertain a date, enough is visible to make out part of a cross on the one in the front, but the coin behind it is too encrusted for even that determination.

In point of fact these two coins have quite a provenance. The smaller coin in front was at one time in the personal collection of author and shipwreck aficionado Thomas H. Sebring. When he sold his collection at auction in 2004 this encrusted coin was Lot 1579. It was attributed to the 1715 Fleet “Cabin Wreck”, Near Sebastian, Florida.  Its larger brother behind it was once in the collection of famed Real Eight CompanyAlso referred to occasionally as “The Real 8 Company”- was incorporated in 1961. It had eight members….Kip Wagner, Kip Kelso, Dan Thompson, Harry Cannon, Lou Ullian, Del Long, Erv Taylor and Lis... More member Dan ThompsonDan Thompson (1920 – 2005) Was a diver and original member of the Real Eight Company. Born in  Savannah, Georgia, he  was an electrical engineer and had a distinguished career in the U.S. Air Forc... More.

All of these encrusted pieces have one thing in common.  They were present and part of an event of great historical importance. While they remain inside their cocoon of sand and shells we will never know their true appearance. And, as such, they will remain tiny entombed artifacts mysterious and enigmatic.